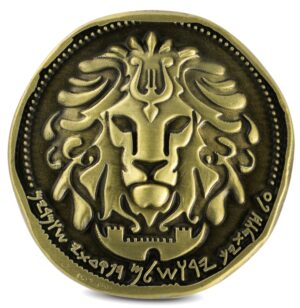 The true location of ancient Jerusalem was only rediscovered a mere 150 years ago, located 400 meters to the south and outside the walls of what is today known as the Old City. Significant archaeological discoveries were made in the City of David over these 150 years, but ongoing excavations have only been done over the last 25 years. These excavations provided us actual physical proof of the authenticity of the Bible.  It is not hard to see that our generation is witnessing wonders that so many longed for, but never merited to see.

As “Watchmen on the Walls,” we have to remind God and take initiative in order to see Jerusalem restored to her former glory – until God makes her again as a Praise to the Earth (Isaiah 62:6-7). We have to turn word to deed by assisting the excavation process.

The lion has long been associated with King David and Jerusalem. David’s mighty men were described as having the faces of lions (1 Chron 12:8). It is also the Biblical symbol of the tribe of Judah, from which David is descended. The emblem of Jerusalem, the capital of the Kingdom of Judah, prominently features the Lion of Judah.

The harp represents King David’s humble spirit before God. David was known as the “Sweet Singer of Zion” and his psalms are still recited today as powerful prayers.

The original walls of ancient Jerusalem mentioned in Isaiah have only been revealed recently, thanks to excavation efforts.  Join the legacy of the watchmen that were posted in prayer on these very walls.

The inscription reads (in Ancient Hebrew): “On your walls Jerusalem, I have appointed watchman.“

The Principle Behind the Coin

We have the hands, but we also need the resources. Ancient Jerusalem is being excavated according to the highest standards set by the Israeli Antiquities Authority. Highly-skilled and passionate archaeologists are overseeing the excavations. Trained and educated excavation teams are working around the clock to reveal ancient Jerusalem. Committed volunteers from all over the world work alongside our teams, assisting wholeheartedly with the laborious work. Yet, despite all of these efforts, so much of ancient Jerusalem is still waiting to be uncovered and shared with lovers of Zion throughout the world.

By acquiring a Jerusalem Watch Coin, you are actively supporting the excavation of ancient Jerusalem, becoming a tangible part of the fulfillment of the prophecy (Isaiah 52:2).